Well somehow I managed to sneak my way back onto live tv this morning for another appearance on the Today Show.  This was the second time in less than 2 months that I’ve been on it (1st appearance) which is pretty awesome, but I think I’m ready for a speaking role next time.    Either way I’m thankful for some more face time on national tv, especially because it was with a solar powered boat.

When I get casted for things without having to go a audition I usually don’t know much information about the project, so when I showed up to the studio this morning I was a bit clueless on what I would be modeling for the fantasy gift segment with Neiman Marcus.  After being briefed what my role was I instantly became more excited because I found I was playing the captain for the largest solar yacht in the world!

Although it is out almost everyone’s price range coming in at a cool 7.1 million dollars, at least it is fitted with more than 1,100 square feet of solar panels.  Supposedly in a matter of time you will be able to recoup the money you spent on the boat just from the fuel savings alone.  Not a bad fantasy and I’ll happily captain that ship any day, but I would love to see this fantasy turn into a reality with more attainable average sized boats using this concept for renewable energy!

Check me out in the clip below (30 seconds into it) 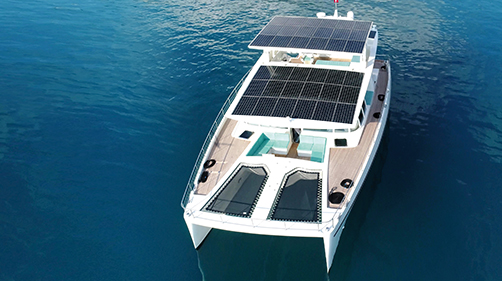